skip to main | skip to sidebar

When I walked along Over High Street and Church End on Friday evening, I realised that all the lights were out. I have reported the failure to the streetlighting section and will update you when I know what the problem is and how soon they can be repaired
Posted by Shona Johnstone at 13:03 No comments:

Pharmacy Application for Over

I have been inundated with letters objecting to the proposed pharmacy in Over, virtually all of them pointing out that we already have a very successful dispensary operating within the surgery and questioning the economic viability of a pharmacy. I agree entirely with these sentiments and will be sending my own letter within the next few days, echoing these points. I hope to respond individually to everyone who has written to me - but it may take a few days, so in the meantime, this is a personal thank you for taking the trouble to write. I hope it will pay off
Posted by Shona Johnstone at 13:21 No comments:

I have been advised of work to be carried out by the County's countryside access team in Longstanton in the next few weeks. The text of the e-mail is as follows:
Just to advise you of some countryside access improvements we will be making in Longstanton over the next month or so as part of the Northstowe countryside access project:
Replace 2 bridges at northern end of footpath 9 (at 'The Manor'). In order to improve safety and access for a wide range of users, new bridges will be wooden with a 'tar and chip' non-slip surface, and will be flush to the banks with no steps.
Replace broken kissing gates at each end of footpath 9. New wooden medium mobility kissing gates will be put in in order to be in keeping with this conservation area.
We will provide funds for the parish to carry out tree planting along footpath 3, next to the recreation ground.
We will be contributing to the cost of grass seed for the recreation ground.
There will be more improvements to Longstanton in the near future, but these works will be happening soon
Posted by Shona Johnstone at 04:37 No comments:

Having just come back from holiday I have now seen the formal county response to the proposed Post Office closures in Cambridgeshire. I am very glad to report that the County has taken on board all the comments that we have made about the recent history and the plans for an expanded shop and postal service in Over and is opposing the closure.

The Post Office will now consider all the responses received (today is the closing date for comment) and will make a final decision some time in September. If the closure is confirmed, which I very much hope won't be the case, then the Post Office would close in November.
Posted by Shona Johnstone at 04:31 No comments:

A Pharmacy in Over

On top of all the other activity going on at present, there is now an application to open a pharmacy in Over. Whilst this may appear to be a positive in terms of regenerating the High Street area, it would have a very significant impact on the surgery. At present the surgery is able to operate a dispensary because there is no pharmacy within a one mile radius. The dispensary brings in enough income to fund at least one additional GP at the surgery. If a pharmacy opened, the dispensary would have to close. This would mean the closure of the dispensary. So the surgery would have to lose at least one GP. In addition, once you have been to the surgery and collected your prescription - or repeat prescription, you would then have to walk down to somewhere near the High Street (the location has not been identified) in order to have the prescription made up. This would cause serious hardship to a number of people - not least residents of Elm Court and clients at the Day Centre. It would not be popular at the surgery either - as one of the doctors said to me this week - if there is a query over a prescription the pharmacist can just pop out and ask; they couldn't do that if the pharmacy was a quarter of a mile away.
The applicants claim that a pharmacy would provide greater choice - personally I can't quite see how closing an on-site dispensary to open a pharmacy provides for greater choice.

Just as with the Post Office, it is really important that people make their views known. In this case, write to:
Contracts Department
Primary Care Services
18 Vinery Road
Cambridge CB1 3DX
But give the letter to either the Parish Clerk, or to the surgery. The closing date for comments is 5 September - so yet again, we are given just the summer holidays in which to respond.
Posted by Shona Johnstone at 06:39 No comments:

Since the Windmill Bridge opened again last week, it has emerged that there are problems with the new junction where Over Road meets the bypass and Ramper Road. At present the "old" priorities remain, but I know from watching that there is confusion as to who exactly does have right of way - as well as problems with visibility. The contractors have made some changes, but to no avail, so it is planned to bring forward changes to the junction. I have been advised that this means that from this weekend priority at the junction will be Ramper Road and the bypass.Traffic from Over will have to give way. There will be signs warning of the change and the road will be marked, but clearly this will be very different from what we are used to. Once the bypass is open then traffic from Over will need to run left at this junction and use a short length of link road before joining the bypass at a new roundabout.
Posted by Shona Johnstone at 04:50 No comments:

Windmill Bridge and the guided busway 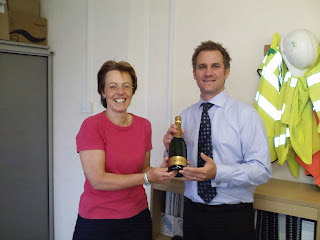 When I learned, back at the end of May, of the delays to the re-opening of the Windmill Bridge I have to admit to a degree of scepticism about the revised opening date. So much so, that I bet the officers a bottle of champagne that it would not be open again before the end of the week. Somewhat to my surprise, they agreed to the bet - in fact they even tried to raise it to a case! So, true to my word, I dropped into the site offices in Longstanton this morning to hand over the said bottle. It was a good opportunity to find out about the progress of the scheme. The gantry laying the beams has reached Milton Road and will now be heading back to Longstanton, where it will get a clean and service, before heading north towards St Ives. Certainly going over the new bridge, you get a real sense of progress, with the laying of the foundations towards Swavesey. The large crane between Windmill Bridge and Swavesey is for installing the new culverts, of which there are a number in this area. At present all seems on track (excuse the pun!) for a spring opening, although completion of Hill Road bridge on target will be challenging because of the scale of the works there.

The other good piece of news is that the butterflies seem to have accepted their move and have been seen in their new habitat. For such a rare species, this is really encouraging.
Posted by Shona Johnstone at 11:52 No comments: